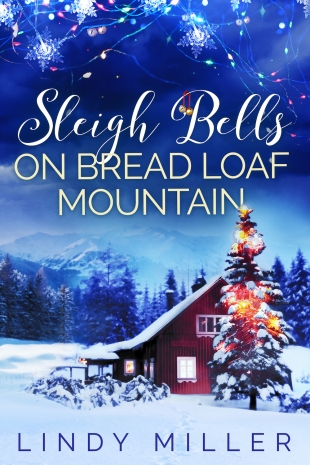 Screenplay by the writer of Rescuing Madison and A Lesson in Romance (Hallmark), and the forthcoming Aloha with Love.

Christmas isn’t fashion editor Roxanne Hudson’s style, but when she finds herself snowed in with a handsome stranger, she might just discover the magic of the season after all.

Roxanne Hudson does not like the holidays. They come with too many family obligations that take her away from work as a rising fashion editor in New York City. But this Christmas might be Grandma Myrtle’s last, and Roxanne’s parents want her to spend the holiday at the family cabin in the Green Mountains. With her boyfriend out of the country for a photo shoot, Roxanne decides to brave the long commute—and the wilderness—to spend Christmas in Vermont.

After an uncomfortable call from her boyfriend starts the trip off badly, Roxanne is blindsided by a blizzard on the snowy mountain road, where the last thing she hears before losing consciousness is sleigh bells. When she’s rescued by Mark Foster, a handsome park ranger who’s the exact opposite of everything she always thought she wanted, Roxanne seeks her grandmother’s wisdom and discovers an uncanny connection that could be a sign of what her life is really meant to be.

Happy book birthday week to Lindy Miller’s Sleigh Bells on Bread Loaf Mountain. Thank you to Rosewind Books, Miller, and Xpresso Book Tours for a free eARC in exchange for an honest review. Time to turn off the Hallmark Channel because I’ve found the perfect book to read that will make you feel like you’re in one of their Christmas movies.

Miller writes a very sweet romance between a woman who’s been fighting hard to shape herself into someone who will succeed in her line of work and an unlikely down to earth hero. Roxanne finds herself challenged to look at this life she’s built for herself in a very honest way to see what she is pushing away in the meantime. A trip she didn’t even want to take to be with family for Christmas ends up making her question why she was distancing herself from her family in the first place. And a very attractive park ranger helps her understand the magic and meaning of Christmas.

I was very enchanted by the Christmasy spirit intertwined in the story with a cute romance to boot. There were some inconsistencies that bugged me, which brought down my review some, including a very big emphasis placed on how unprepared Roxanne was for all the snow and cold in Vermont. She is in fact from New York, which DEFINITELY get lots of snow and even blizzards sometimes. It’s very impossible to live in New York full time without a warm winter coat. The fact that this detail kept being harped on made me feel like Miller thought her reader was dumb. Aside from this, this Christmas romance warmed my heart and put me in the holiday spirit.

Lindy Miller is an entrepreneur, award-winning professor, and publishing professional. In 2011, Miller was part of the executive leadership team that founded Radiant Advisors, a data and business intelligence research and advisory firm, where Miller developed and launched the company’s editorial and research divisions, and later its data visualization practice, for clients that included 21st Century Fox Films, Fox Networks, Warner Bros., and Disney. She is the author of numerous papers and two textbooks under the name of Lindy Ryan, The Visual Imperative: Creating a Culture of Visual Discovery (Elsevier) and Visual Data Storytelling with Tableau (Pearson) Miller holds a Bachelor of Science degree in Business Administration: Entrepreneurship and Strategy, and a Master of Arts in Organizational Leadership and a Doctorate in Education, Organizational Leadership.

SOMETIMES IT TAKES ONE BROKEN HEART TO HEAL ANOTHER.

Courtney Winston is a writer on a deadline. Eager to finish her book and get over a recent break-up, she ditches Christmas with her family and retreats to a secluded cabin in the mountains.

Appliances rarely work, and cell service is spotty, but Courtney senses there is more to her rustic rental—something dark and haunting.

Then Peter, the attractive Stone Mountain Lodge owner, and a meddling cook, Mrs. Finn, keep coming around, shattering her peace and offering advice on how to fix her heavy heart.

Courtney grows closer to Peter, but Mrs. Finn warns her of his troubled past. Undaunted, Courtney sets out to win him over. But being with the brooding stranger may end up costing her more than she ever imagined.

She spotted the bridge and decided crossing it would be faster than fighting the ice. Courtney headed toward the arched structure, wishing she had never come with Peter to the magical place.

She stepped over clumps of brush along the shoreline, her boots sinking into thick patches of snow as she hurried to reach the bridge.

The stonework on the steps was like the mantle in the cabin. The same attention to detail reminded her of Peter. Even when he chopped wood, he had to make everything precise.

Her glove brushed the smooth surface of the wooden railing, wondering how many hours the two young men spent building the bridge. That Peter’s beautiful remembrance of his life with his brother should be hidden away in the woods made her sad. If only others could see what they had done.

Then a funny indentation in the railing stopped her cold.

She rubbed the surface, not sure if the imperfection was intentional or just a play of light on the dark wood.

A portion of the railing had been expertly carved away, leaving a name raised in the wood like a bas-relief. The letters were swirled and decorative. This was professional, even, and expertly done. It wasn’t the work of a lovesick schoolboy, but a man who worshipped the woman whose name he’d forever attached to the bridge—Evelyn.

Courtney’s knees became weak as she traced the name she had no doubt Peter etched there. The love he’d borne for the woman became painfully clear.

Her heart grieved, sinking like an anvil in her chest. No one would carve her name into anything, or pine for her after she went off with another. She wasn’t the kind of woman who lived fairy tales. She only read about them in books.

He was in the middle of the bridge, a few feet away. So caught up in the testament of one man’s love, Courtney had not heard Peter’s heavy boots or felt the bridge tremble under his weight.

He swung his hands behind his back. “What makes you think it was me?”

She glanced at him and tipped her head. “I didn’t realize how much you loved her.”

The thin line was back on his lips. “Neither did she. I carved this right after she married Lawrence.”

She tapped the carving with her hand. “Has she ever seen

Alexandrea Weis, RN-CS, PhD, is a multi-award-winning author, screenwriter, advanced practice registered nurse, and historian who was born and raised in the French Quarter of New Orleans. Having grown up in the motion picture industry as the daughter of a director, she learned to tell stories from a different perspective. Infusing the rich tapestry of her hometown into her novels, she believes that creating vivid characters makes a story moving and memorable.

Weis writes romance, mystery, suspense, thrillers, supernatural, and young adult fiction and has sold approximately one million books. She lives with her husband and pets in New Orleans where she is a permitted/certified wildlife rehabber with the Louisiana Wildlife and Fisheries and rescues orphaned and injured animals.