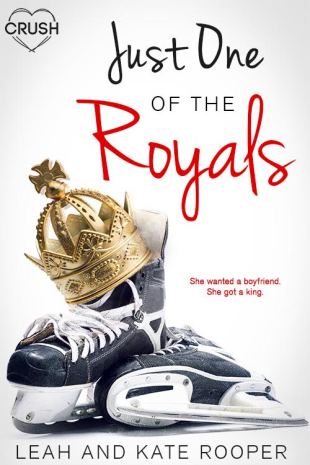 Star hockey player Daniel Sacachelli wants only two things: 1) for the Falcons
to win next season, and 2) for his secret — the fact he’s actually the prince of Eldonia — to never make its way to Chicago. But if Daniel keeps avoiding his crown, their family will lose their kingdom forever.

Madison Myong can’t believe that her will-they-or-won’t-they best friend Daniel is
really a prince! He’s always seemed more rebel than royal. But now, he needs to clean up his image, fast. Posing as his long-time girlfriend, Madison accompanies him back to Eldonia, intending to give Daniel a makeover fit for a king.

Only, the more royal Daniel becomes, the more Madison misses her best friend. And if she does her job right, she’ll lose him forever…

“But I know that in order to pull this off, I’m going to have to let go of every real thing about me. I’ll have to become someone else, someone new, someone…royal” (chapter 6).

Happy book birthday to the second book in the Chicago Falcons series, Just One of the Royals by Leah and Kate Rooper! Thank you to the Rooper sisters, Entangled Teen, and Chapter by Chapter for my eARC of the book in exchange for an honest review. While I have not read the first book in the series, these books are actually just different stories about different people on this hockey team, so there isn’t a ton of build up missing by jumping into the second book, and the reoccurring characters are reintroduced.

This book felt very much like The Princess Diaries vibes: Daniel is a prince who grew up living a normal life in Chicago. He needs to be whipped into shape and lose his bad image in order to take the throne of a small European country after the death of his father. The biggest difference is that he brings along his best friend and secret crush, Madison, to play the role of his girlfriend in order to improve his image. Boy, do things get messy there!

Madison’s goal in life is to be a big time movie star, so when she is offered the role of a lifetime, and the opportunity for her big break if she succeeds, there’s no way she’d turn it down! Especially when it means more time with her best friend. But with so much acting going on by both Daniel and Madison, how is anyone supposed to tell what’s real and genuine, and what’s not? Are the people they strive to portray taking them away from the people they really are?

Just like Mia Thermopolis, while learning about this country he is being asked to rule, Daniel learns about the people, the culture, and begins to love everything about it. He starts to take a genuine interest in the people around him, which is honestly one of the biggest character growth scenarios he goes through. It’s no longer about what he wants when he wants it, but about how the people around him are affected.

The playboy who gets serious about one girl trope seems to be super common in YA contemporary books lately. It didn’t really feel necessary to this plot–there are plenty of other ways Daniel can be selfish and unfit for the throne. From this aspect, there doesn’t seem to be much creative liberty and I was wishing for more depth to Daniel.

Leah and Kate Rooper are sisters from Victoria, British Columbia, Canada. Growing up beside the Pacific Ocean and inside a temperate rainforest fed their sense of adventure as children, and nourished a curiosity for strange and distant lands. They fed this curiosity with books – lots and lots of books. After experiencing the magic of Middle-earth, they began creating their own worlds. When they’re not writing, Leah and Kate spend their time blogging and vlogging about their travel adventures and their writing journey.