They’re only good at being bad.

Cora Saros is just trying her best to join the family business of theft and intergalactic smuggling. Unfortunately, she’s a total disaster.

After landing herself in prison following an attempted heist gone very wrong, she strikes a bargain with the prison warden: He’ll expunge her record if she brings back a long-lost treasure rumored to grant immortality.

Cora is skeptical, but with no other way out of prison (and back in her family’s good graces), she has no choice but to assemble a crew from her collection of misfit cellmates—a disgraced warrior from an alien planet; a cocky pirate who claims to have the largest ship in the galaxy; and a glitch-prone robot with a penchant for baking—and take off after the fabled prize.

But the ragtag group soon discovers that not only is the too-good-to-be-true treasure very real, but they’re also not the only crew on the hunt for it. And it’s definitely a prize worth killing for.

Whip-smart and utterly charming, this irreverent sci-fi adventure is perfect for fans of Guardians of the Galaxy, The Lunar Chronicles, and Firefly.

“Together we will accomplish great, but possibly not legal, things,” she whispered
(chapter 23).

Happy book birthday to Danielle Banas’s latest release, The Good for Nothings! Thank you to Banas, Xpresso Tours, and Swoon Reads for a free eARC in exchange for an honest review.

Who knew that thieves could be heart-warming? A ragtag group staring two aliens, a human, and a malfunctioning robot are able to make a deal with their warden to journey across space, face indescribable dangers, and bring back a treasure of legends. All in return for their freedom. Or so he says. The whole trip is filled with misadventures, plans of betrayal, acidic plants, budding friendships, and a desire to belong. A typical day in the life of a teenager, right? At least for these four.

Banas writes a creative, fast-paced, adventure tale…IN SPACE. I always forget how much I love sci-fi until I’m knee deep in it. Cora is a moody criminal, an unlikely main character to adore, but you can’t help it when she shows just how much she is willing to do for those she loves (mostly her robot, who is the CUTEST little sidekick!) This team of misfits fit so perfectly together, and because they’re criminals, there’s no line they won’t cross to get what they want. 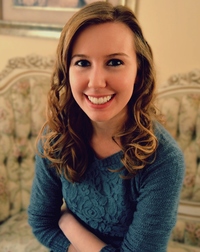 Danielle Banas is the author of THE SUPERVILLAIN AND ME and THE GOOD FOR NOTHINGS. She earned a degree in communication from Robert Morris University, where she spent slightly too much time daydreaming about new characters instead of paying attention in class. When she isn’t writing, Danielle can be found loudly singing show tunes, spouting off Disney World trivia, and snuggling with her puppy. She lives in her hometown of Pittsburgh, Pennsylvania.

Tour-wide giveaway (US only):

Print copy of The Good for Nothings

2 thoughts on “Book Review/Blog Tour – The Good for Nothings”