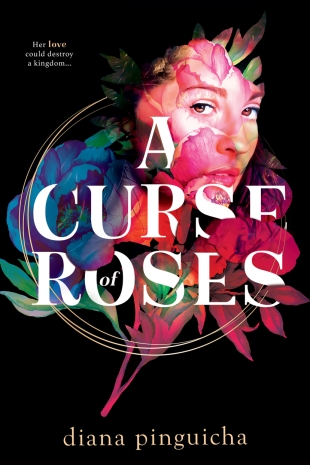 There’s a famine plaguing the land, and Princess Yzabel is wasting food simply by trying to eat. Before she can even swallow, her magic–her curse–has turned her meal into a bouquet. She’s on the verge of starving, which only reminds her that the people of Portugal have been enduring the same pain.

If only it were possible to reverse her magic. Then she could turn flowers…into food.

Fatyan, a beautiful Enchanted Moura, is the only one who can help. But she is trapped by magical binds. She can teach Yzabel how to control her curse–if Yzabel sets her free with a kiss.

As the Kind of Portugal’s betrothed, Yzabel would be committing treason, but what good is a king if his country has starved to death?

She’d sought out Fatyan to help her save the people. Now, loving her could mean Yzabel’s destruction.

Based on Portuguese legend, this #ownvoices historical fantasy is an epic tale of mystery, magic, and making the impossible choice between love and duty…

Happy book birthday to Diana Pinguicha’s A Curse of Roses! Thank you to Entangled Teen and Pinguicha for a free eARC in exchange for an honest review.

Pinguicha writes a fantasy loosely inspired by Portuguese folklore with an own voices spin. Yzabel not only struggles with a magical curse that’s slowly killing her, she struggles with her faith, her role as future queen, and her sexuality in a time where people are rejected for anything apart from the norm. In her self-discovery journey to understand the blessings in her life, including her magic, she learns she has more people who are willing to support her than she ever could’ve imagined.

I was bothered by the pacing of the story, finding much of the middle dry. I also struggled to connect with the characters because anytime they started to show a flaw, someone swooped in and dismissed it as a flaw but a strength. Flawless characters aren’t very exciting. The most redeeming part of the plot was seeing Yzabel work through her frustrating self-hatred and religion-based self-harm, but it did seem to turn around very suddenly. Everything was fixed in the end because all you need is love. I found myself wishing for more depth to the characters and less of an obvious good guy vs bad guy type of story.

I just finished this one and had a lot of thoughts and conflicting feelings. Have any of you read it? Thoughts?
My first book from my 100 Books Scratch Off Poster was American God’s by Neil Gaiman. I loved it and gave it 4 out of 5 stars.
Happy Sunday, friends. I am finishing up AMERICAN GODS tonight. I love it, but I think I’m going to give it 4 stars just because I couldn’t stay invested for long periods of time. I also read THE GLASS CASTLE in March for book club, which was heartbreaking and beautiful! The next book I am going to pick up is A FLICKER IN THE DARK.
How many books is too many books to read at once? Asking for, you know, a FRIEND. 😬
Join me as I read the titles from my 100 Books Bucket List scratch off poster. I know I’m awkward. 🤦🏻‍♀️
Do you read on your lunch breaks? If not, how do you try to squeeze some reading into your day?
Follow June Reads Books on WordPress.com