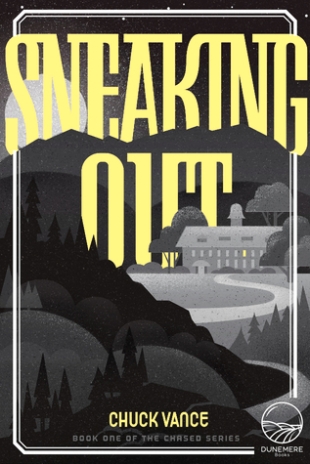 Could you sleep next to a murderer?

Luke Chase—yes, that Luke Chase, a modern hero ripped from the headlines—didn’t mean to get caught up in Mrs. Heckler’s murder. He just wanted to hook up with the hot new British girl at St. Benedict’s, and if that meant sneaking out to the woods after hours, then so be it. But little did he know someone would end up dead right next to their rendezvous spot, and his best friend and roommate Oscar Weymouth would go down for it. With suspects aplenty and a past that’s anything but innocent, Luke Chase reluctantly calls on his famous survival skills to find the true killer.

For fans of “A Study in Charlotte” and boarding school lit, “Sneaking Out” (book one in the “Chased” series) immerses readers in the privileged prep school world, with a mystery that exposes the dark side of life on a residential high school campus.

“Come quick! You gotta see this!”
Luke was just exiting Talbot and walking toward the quad behind the library when Andy Slater called out to him. He stopped and waited for Luke as several students ran past, taking the path toward the pond.
“What is it?”
“Just come! They think they found something.”
“By the time Luke and Slater made it to the pond there was a large group of kids clustered in the northwest corner pointing at something. Luke could see two security guards in front of the pack, furiously talking on their walkie-talkies, and one on his knees by the pond.
“What is it?” Luke asked.
Andy elbowed through the crowd, with Luke following. There was frenzied excitement in the air, and everyone was pointing and talking nervously.
“It’s a bra!” said Andy, who had a better view from his vantage point.
The news rippled through the crowd, setting off a cacophony of comments and outbursts.
“Is it Mrs. Heckler’s?” some student called out.
“The Southborough Strangler was here!” shrieked a girl’s voice.
“Was someone else murdered?” another girl called out.
“Okay, everyone, move aside.” Mr. Hamaguchi, a science teacher, pushed his way through the crowd. “Step back right now or you will be receiving demerits.”
The students dispersed enough to make a path for Mr. Hamaguchi and the additional security guards. Mr. Hamaguchi bent down next to the security guard, who was using a stick to pull the bra toward him. Luke heard footsteps slapping the pavement and glanced to his side to see Mr. P. running from the direction of Archer. His tie was askew and his hair windblown.
“What is it?” asked the dean, moving toward Mr. Hamaguchi.
The guard pulled up the bra in time for everyone to see that it was a lacy and red. He immediately bagged it in a Ziploc and sealed it closed. Mr. Hamaguchi and the dean conferred in hushed tones, and everyone stood still, craning to hear what they were saying.
“Is it Mrs. Heckler’s?” Andy called out.
Mr. P. put his hands up. “Everyone back to class.”
“Should we be worried?” a girl’s plaintive voice called out.
“No. This was obviously a prank, and not at all funny,” warned Mr. P. “We will be looking into this.”
“How do you know it’s a joke?”
“Yeah, maybe someone else was strangled and dumped in the pond.”
That set off a new wave of frenzied discussions.

Chuck Vance is a pseudonym for a bestselling writer of both adult mysteries and novels for young adults. Vance attended boarding school in Connecticut and graduated from Columbia University. Vance has lived in New York, Moscow, London, Paris and Los Angeles and is frequently on the move.

One thought on “Blog Tour – Sneaking Out”