Shaila Patel’s second installation of the Joining of Souls series comes out in FIVE DAYS! Today I’ve got an early review for you to help you get excited. Thank you, Shaila Patel, for my eARC. If you missed my review for the first book, check it out here: Soulmated. I also have an interview with the author after the first book’s release HERE, as well as an excerpt of Fighting Fate HERE!

Empath Liam Whelan is determined to protect Laxshmi “Lucky” Kapadia, the girl he loves, at all costs–even if it means breaking her heart to keep her alive. Stopping the joining cold means Liam’s life is in danger from the Soul Seekers and the ruthless Minister Gagliardi who now has designs on Lucky. Liam has no choice but to find the strength to fight his desires, fight the joining, and fight fate.

After the unthinkable happened, Lucky’s “hallucinations” have been working double-time. Heartbroken and plagued by doubts, she meets a man who gives her a mind-blowing explanation for her predicament. Her apparent savior provides her with an escape from her hell: run away with him or return to her drab existence and watch Liam move on with her heart in his hands. All Lucky ever craved was to be in control of her own fate, but when her only choices fight against her heart, can she find the strength to battle for what she wants?

Shaila Patel did it again! The characters were captivating, the connections between Liam and Lucky were descriptive, and my heart was beating out of my chest with ANOTHER cliffhanger! Why do you do this to me, Shaila?

One thing I particularly loved about this second book is the more in depth looks into Liam and Lucky’s individual cultures, as well as that of the empaths. The descriptions of the landscape of Ireland and the foods of Lucky’s Indian heritage created a desire to know more, to understand more. I even went and made myself some penda after reading the mouth-watering descriptions! There is also a bunch more background on the empath history, which sometimes slowed the plot down quite a bit, but it all ties up very nicely by the end of the book. 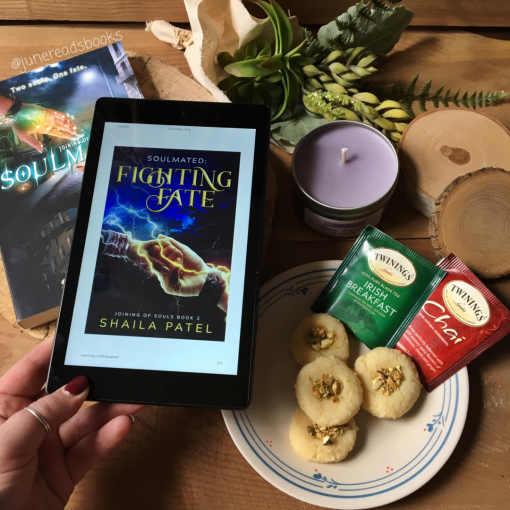 As Lucky learns more about what it means to be an empath, her powers and connection with Liam, and the dangers racing toward her, it honestly gave me some Twilight vibes. Let me preface this by saying I do NOT like the Twilight books, I DO like the Joining of Souls books. For starters, I think Patel writes these stories better than Meyers did. But the phenomenon of Lucky turning into this supernatural being and Liam teaching her about this world and her powers made me feel a ton of similarities between the stories. Thankfully, while Liam and Lucky can get pretty obsessive about each other, neither are whiney and selfish like Bella and Edward. In fact, one thing I admire a ton about their love for each other is how much they seek to put the other person before themselves, trying to give them what’s best for them. But, like typical teenagers, that’s not always actually the best thing for them.

There is still the tension of Lucky’s mom’s desires and Lucky being straddled between Indian culture, American culture, and empath culture, which is one of the most interesting conflicts in these books in my opinion. How does Lucky stand up to her mom without dishonoring her? How can she be one person split between so many people and worlds?

Patel does a fantastic job of jumping in right where Soulmated ended, while also slowly reminding you of things from the first book without being completely obnoxious. Yes, that’s a thing. I remember hating it way back when I was a kid reading the Nancy Drew books as a kid. YES I KNOW WHO NANCY IS BY THIS POINT, OKAY? The last fourth of the book had my heart racing. I was reading as fast as I can, devouring the drama. Unfortunately, as I mentioned earlier, Shaila LOVES her cliffhangers, so now I have to wait even MORE impatiently for the next book!

One thought on “Review – Fighting Fate (Joining of Souls #2)”

When there’s a lot going on in your life, do you find yourself retreating to books, or do they get pushed on the back burner? I’ve noticed that I don’t prioritize reading when things get crazy, but I sure as heck feel better when I do.
Happy book birthday to IN THE PENALTY BOX by Lynn Rush & Kelly Anne Blount! 🎉 Thank you, @entangledteen, for my copy! I’m about halfway through right now and it’s such a cozy read, perfect for winter reading. It’s also helping me get over the fact the @netflix’s Spinning Out won’t be getting another season. 😭
I went into Barnes & Noble the other day to treat myself to some books on my TBR, and goodness, I forgot how much of a rush it is to bring home new books! We’ve been living the frugal life this year, but I think it makes me appreciate my books even more.
Bailey: Keeper of Bookshelves.
Living my best beach life with my current read.
My current read with some recent purchases. Have you guys read any of these?
Follow June Reads Books on WordPress.com